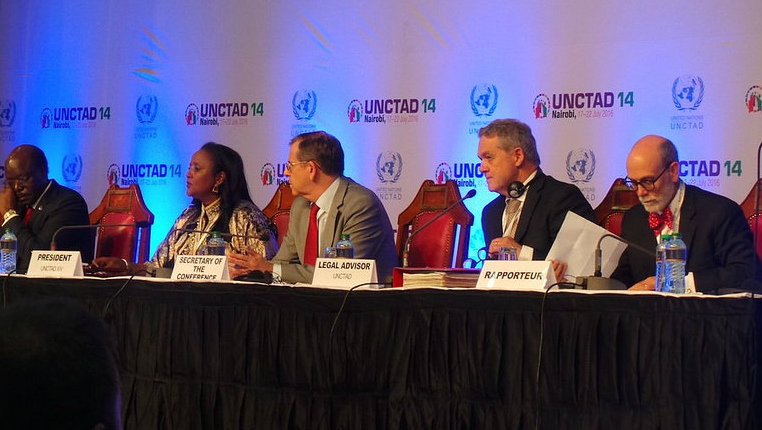 Civil Society Organizations (CSOs) and many of the developing countries wanted to strengthen UNCTAD’s mandate enabling it to play a greater role in renewing international trade and financial structures. The UNCTAD’s members, rich countries mainly, however denied to strengthen UNCTAD’s mandate in this regard.CSOs who participated in the 14th session of UNCTAD, did not hide their disappointment on how the rich countries ensured exclusion of developing countries. Addressing the members of UNCTAD, participating CSO´s mentioned that:“In the negotiating text, we first saw deletion of the right of developing countries to participate on an equal footing in international tax forums. Second, the intergovernmental expert group on tax was stripped out of the text. And lastly, the references to expanding the mandate of UNCTAD to do more work on tax were deleted.To be clear, we strongly appreciate the work that UNCTAD has been doing on tax, and we look forward to receiving more outputs. But continuing business as usual is not going to be sufficient to ensure that developing countries have the tools they need to overcome the immense challenge of halting illicit financial flows.”***According to the report of the High Level Panel on Illicit Financial Flows from Africa, over the last 50 years, Africa is estimated to have lost in excess of $1 trillion in illicit financial flows (IFFs). This sum is roughly equivalent to all of the official development assistance received by Africa during the same timeframe.Since the beginning of 2000 many African countries have received significant foreign investment, principally in natural resources sector, but these investments are not benefitting most of the people. The majority of people are getting poorer when elites are getting wealthier.Throughout the conference CSOs were convinced that UNCTAD members could come out with concrete measures to allow poor countries to deal with issues causing poverty. But, unfortunately this didn’t happen.For example UNCTAD 14 didn’t accept the possibility for the developing countries to get independent advice on how to stop the enormous losses through illicit financial flow and tax avoidance.***During the closing statement CSOs underlined that:”The Outcome places too much hope on Public Private Partnerships, without frameworks for accountability to ensure they deliver on development. On trade, at a time when the inequality and unrest triggered by globalization are haunting the fabric of entire societies, we would have liked a clearer mandate to examine the pros and cons of trade liberalization, engage in the critical rethink of trade rules and recommend ways to fulfill the WTO Doha Development mandate.On global value chains, a stronger mandate to work on their governance, so as to address unfair distribution of gains across the chain, and detrimental impacts on employment conditions and inclusive growth, was needed.”The fulfilment of the Sustainable Development Goals is mainly dependent on domestic resource mobilization. We stress that effective taxation, including combating tax evasion and reducing opportunities for tax avoidance by multinational corporations, will be critical in the mobilization of resources for the implementation of the Sustainable Development Goals and overall economic advancement of developing countries.The G77 group of developing countries and China joined CSOs in highlighting that curbing corporate tax evasion and avoidance was critical for development and could not be achieved without collective and inclusive action.Currently the rules of international taxation are being set by the OECD, a rich countries’ club where developing countries have little say. With the disappointing outcome of UNCTAD 14, this is set to continue