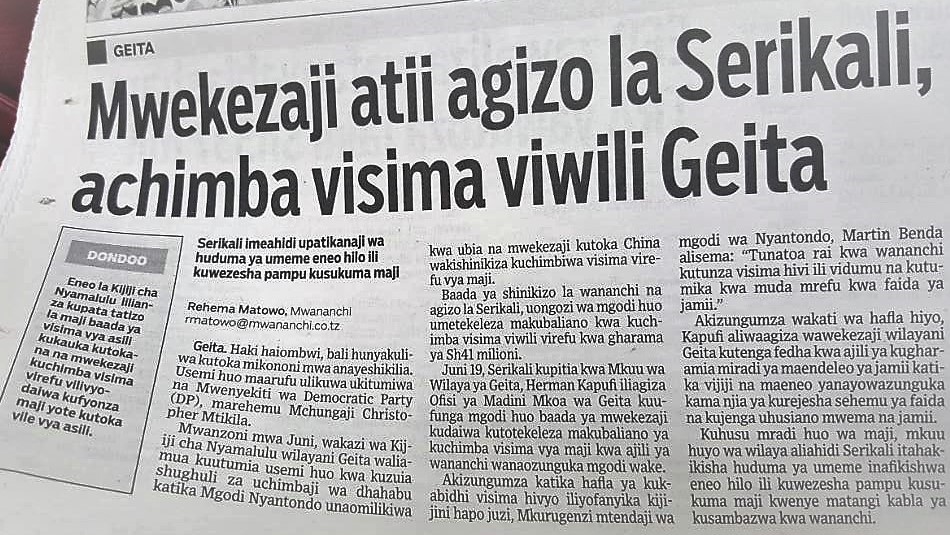 I had an opportunity to visit our partner, Action for Democracy and Local Governance ADLG in Mwanza and do some activities together. I was honored to be part of the team of journalists, local council leaders and ADLG staff, to visit communities near the mining areas in Geita. The purpose of our visit was to collect stories from communities which have been affected by the activities of the mines around them.

My team visited the Mkoani Primary School and Nyantorotoro community to collect stories that would be published in the newspapers. Some of the issues that were raised in these areas were environmental degradation and human rights violations. Other communities which were visited by other teams raised the following issues:

Poor employment contracts with mining companies. It was urged that local government leaders should advise and guide mining workers regarding their employment contract.
Land grabbing since 2004. The locals have been asked not to do any sort of business or development in those restricted areas owned by the mining companies.
Explosions from the mines have damaged schools such as Nyamalembo, Nyakabali and Mkoani Primary schools.
Water crisis in Geita district. The water in Geita is contaminated with chemicals (mercury) from the mines. People use the same water for domestic and agricultural purposes.
Gross violation of human rights. Most of people engaging with mining activities are beaten and jailed. Majority of the small miners have their limbs amputated because they were caught mining in restricted areas.
Poor coordination and communication between local government leaders. The District council leaders are not fully bridging the gap between the people and the investors. They do not hold public meetings and do not inform the people of any developmental projects in their respective areas. Hence, people are unaware of what is happening.
Unfair compensation to the locals during the resettlement process. 2 000 people were asked to relocate due the space required for the mining companies. However, only 86 of those people were promised housing and on the end, the company ended up providing housing for only 18 people.
There is lack of transparency in job opportunities provided by Geita Gold Mines. GGM offered scholarship yet only few local benefited. There are accusations that district council leaders do not share with their communities such information because of their own hidden agenda.

Due to this trip, news articles were published in media. These stories have raised enough awareness to the problems in communities near the mining areas and as a reaction. Thus, Chinese Investors have agreed to construct two wells in those communities without source of clean water.

Another objective of the visit was to conduct a dialogue. The dialogue included members of local council and the district councils of Geita. The dialogue was organized to inform the local government leaders on the issues that were found in those communities near the mines and what steps should be taken to tackle those problems.

At the end of the discussion, group decided to organize a strike outside the GGM to get the attention of the top authority. The main goal was to get the GGM top officials to attend to local government meetings for questioning. Unfortunately, the strike was suppressed by the police and few people were arrested. GGM officials have yet to comment on anything.