Etusivu » Ajankohtaista » How To Safeguard the Space of Civil Society? 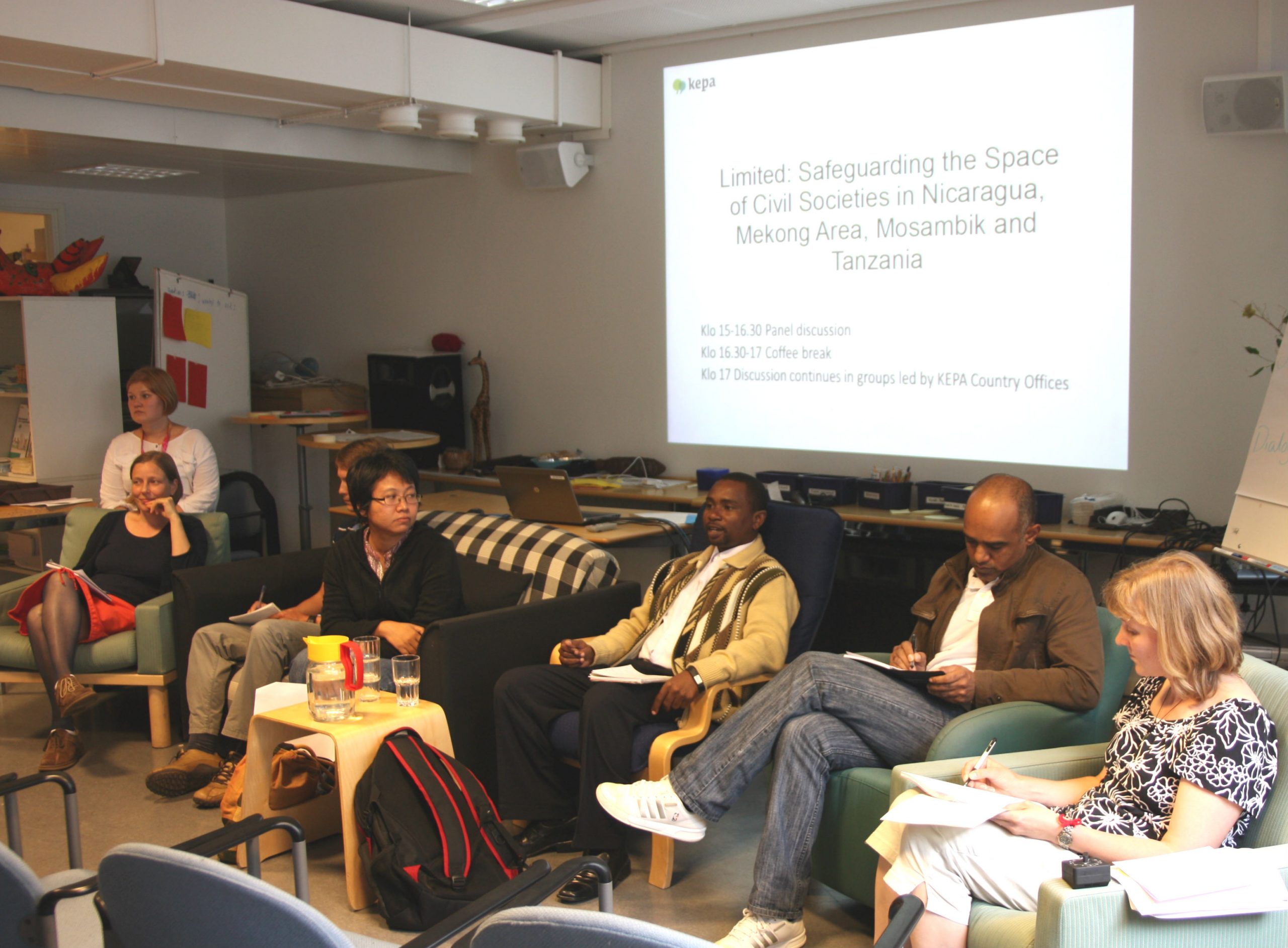 First KEPA staff from the South and then representatives of respective country desks from the Ministry for Foreign Affairs (MFA) shared their opinions on the challenges Southern civil societies face when it comes to enabling environment. The seminar drew 27 participants from civil society organisations (CSOs).
The space for civil society is shrinking in many cases, confirmed the staff from KEPA country offices. Kirsi Chavda from KEPA Nicaragua affirmed that this is the number one challenge for the local civil society, since current government is ”a little allergic” to criticism. Other challenge is internal: the civil society is rather polarized and there’s a lack of coordination between organisations.
The third challenge is that the traditionally favourable donors are leaving the country. ”This means more competition and less openness between CSOs”, Chavda told. Despite all this, civil society still enjoys relative space and freedom.
Bakar Khamis from KEPA Tanzania said that there’s a lack of support from the government to the civil society. A big challenge is that organisations don’t get information about important processes in time and that the government doesn’t value CSO contribution in general. Other challenges include the government’s suspicion towards organisations which get their funding from outside.
The civil society space is shrinking also in Mozambique, told Humberto Ossemane from KEPA Mosambik. In theory the constitution guarantees freedom of association, but in practice the situation has got worse because the dominant party sees the country as its personal acquisition. ”KEPA mostly works with advocacy oriented organisations, which are under the biggest threat. The positive aspect is that many groups are challenging the establishment, which will probably make them stronger”, Humberto analyzed.
The Mekong region was represented by Timo Kuronen and Warangkana Rattanarat, who covered the situation in five countries. Laos and Vietnam are both rather restricted with one-party systems. ”In Vietnam one cannot criticize government policies and CSOs can only work on certain areas and themes agreed by the government”, Kuronen told. ”For example, debate on economic relations and treaties is limited. In some cases NGOs can do advocacy work towards government, as both oppose the dam planned on Mekong river.”
On the contrary, in Laos CSOs cannot speak out about the dam. Last year some 50 non-profit CSOs applied for registration but only one received permit to operate.
In Cambodia democracy is under danger. There are strong restrictions on opinion and media, human rights advocates have been arrested and the media is under government control and the country is very corrupted. The proposed law on associations has been strongly opposed by international civil society.
In Thailand civil society organisations enjoy relative freedom – as long as they leave the monarchy alone and don’t get involved in debates on democracy etc. A more positive case is Burma, where the media censorship has been removed and aid money and investments are floating in. The big question is how human rights organisations will be able to operate in the future.
***
Then the officers from the respective country units of the Ministry for Foreign Affairs took the stage: Pauliina Hellman (Tanzania), Kaisa Heikkilä (Mozambik), Tarja Kangaskorpi (Vietnam) and Hannu Ripatti, Counsellor for Unit for Latin America and the Caribbean.
The panelists pondered how the donor countries can support civil societies whose space is being limited. Apart from funding, Ministry can offer many kinds of support such as networking capacity and collaboration. The embassies play an important role in this.
The support works both ways. Kaisa Heikkilä shared positive feedback KEPA had got from her colleagues in Maputo: ”The power of KEPA to bring different actors together has been excellent.”
New Development Policy Program encourages the participation of Finnish CSOs in the planning of the new country programs. The process is quite similar all over. It’s important to find out the common development goals for the CSOs and the government. The participants emphasized that of course NGOs are free to plan their own work and can complement on the areas government is not working on.
There are many levels of cooperation like sharing analysis and exchanging information on programs. A lot can be shared when it comes to policy advocacy work, good governance related issues and human rights based approach. The Ministry’s view was that the civil society has a big role in making governments accountable, and we can work together on this.
A worry was expressed from the audience that the role of civil society is sometimes perceived narrow, and that it’s essential to have enabling environment especially for CSOs supporting advocacy, human rights and democratic values.
Hannu Ripatti contested about Nicaragua. With the current problems in democracy, the Ministry has turned to small advocacy group trying to find the best ones to get an independent voice but the challenge is that if too much money is given to them they wont’ be so independent voices anymore.
Also local CSOs are involved in the program planning. For example in Vietnam there was a consultation with local civil society and good discussion about their situation. Tarja Kangaskorpi welcomed more Finnish CSOs to the country: ”On this round we only got two applications for Vietnam. Finnish CSOs could have a more important role there.”
There are changes, too. There won’t be a country program for Nicaragua anymore but two regional programs, which will come out in the beginning of 2013, with input from different groups. Hannu Ripatti told that the funding for Nicaraguan NGOs will stay more or less the same – small. ”There are some very good NGOs in Nicaragua that we hope to continue supporting. Challenges include the limited resources and space for CSOs, which makes it hard for them to grow.”
***
More information (partly in Finnish):