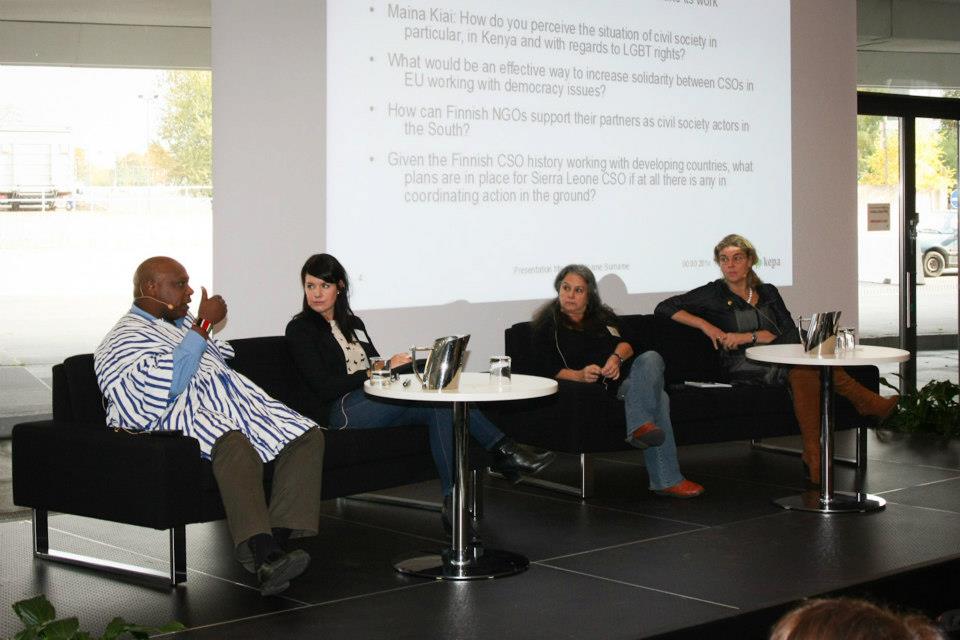 The five guest speakers offered different angels to the topic but all of them agreed that civil society (CS) space is shrinking around the world. While Arab spring was welcomed as a new era, counter development is now taking place both in the South and in the North.
***
The main guest speaker was Mr. Maina Kiai, UN Special Rapporteur on the Rights to Freedom of Peaceful Assembly and of Association. His mandate is recent and, being an independent actor of the UN, Kiai enjoys freedom to criticize the organisation – which he does. You can read about Maina Kiai’s opinions on the UNDP, ”a hole where you put money in and it sinks” in the Kepa.fi news article (in Finnish).
While traveling around, always invited by countries, Kiai has witnessed many challenges and a change in the mindset of international community. After the Arab spring, various governments are afraid and restricting even more the rights of civil society. This doesn’t limit to the South. In Geneve, Switzerland, a law was recently passed restricting peaceful assembly and tight laws are being passed in Chile, Canada, Russia… the list is long.
Ethiopia, ”the foster child of development”, has been extremely efficient in banning access to resources. NGOs can only receive 10% of their budget from international sources and many areas of work are practically banned. Kiai reminded that Ethiopia stands on a very thin basis, as development on the price of democracy never helps anyone.
As was proved a year ago in the Busan High-Level Forum on Aid Effectiveness, the purely economic development agenda is following a different path than the democracy agenda. This can’t be, as development happens only when there’s democracy.
Anyhow there’s hope, Kiai reminded. Despite the restrictions people stand up using their creativity and passion about what they do. Finnish NGOs should also encourage our government to keep the focus on civil society and question it about resources put in countries not respecting human rights.
The representative of the government, Minister for Foreign Affairs Erkki Tuomioja, agreed that without human rights development stands on thin ice. Finland’s Development Policy Program emphasizes human rights based approach and the role of CSOs as independent development actors in their own right to whom the government has to provide enabling environment. The challenge is to put the principles into practise. Tuomioja emphasized that Finland is committed to do this, for example by using the power of good example.
***
Ms. Mirjam van Reisen, Professor of International Social Responsibility at Tilburg University and Director of Europe External Policy Advisors, took the audience back to the basics as to the role of European NGOs as development actors. What is civil society? she asked.
Civil society is organised from inside, unstructured, diverse, uncontrolable and undergoing permanent change.
However, sometimes governments try to define and control civil society, make it uniform and create rules, which forces CS to clarify its role and perspective on what is its contribution to the society. Yet CSOs’ classic mistakes include trying to take the place of the government, being bureaucratic, becoming a gate-keeper or patronizing the Southern civil society.
Van Reisen suggested that aid effectiveness has taken CSOs into their boxes. While they are busy with aid effectiveness, people organise their own solidarity programs. CS is also increasingly competing with private sector for funding and political space. Van Reisen reclaimed the need for new global solidarity, starting from within Europe and EU.
***
How do civil society actors themselves experience the shrinking space? Examples were shared by Director Ms. Anabela Lemos from Justica Ambiental, Mozambique, and by Development Secretary Tuomas Tuure from the Finnish Threshold Association (Kynnys).
We cannot call ourselves democratic, Anabela Lemos stated, when the participation of civil society is only a mark on paper. In Mozambique, a small elite has complete control of the government, politics and business. The space is taken away from CSOs and they suffer from big problems and face real danger. Areas of concern include landgrabbing, human rights abuses and eco-system loss. Lemos encouraged Finnish organisations to make Southern SC voices heard by networking, support and distributing information.
Tuomas Tuure accused Maina Kiai of stealing his idea – about criticizing UNDP and Ethiopia. Tuure told that the Ethiopian Federation of Persons with Disabilities had to redefine itself as a charity organisation when advocacy was prohibited. However, people found out that there are flexibilities within the laws and were creative in modifying the meanings of advocacy and charity. Similar tactics are applied in Central Asia, another challenging area for Threshold Association: speaking of ”less threatening” disability instead of gender, human rights etc.
The conversation continued in a panel discussion and finished with the words by Timo Lappalainen, Executive Director of Kepa. The ultimate question of the day was: What helps us to foster freedom? Lappalainen reminded that civil society needs to stick together and show global solidarity. Democracy and development go hand in hand and independent free CSOs are a key element of this structure: ”Trust the humans, they’ll do the trick in the end.”