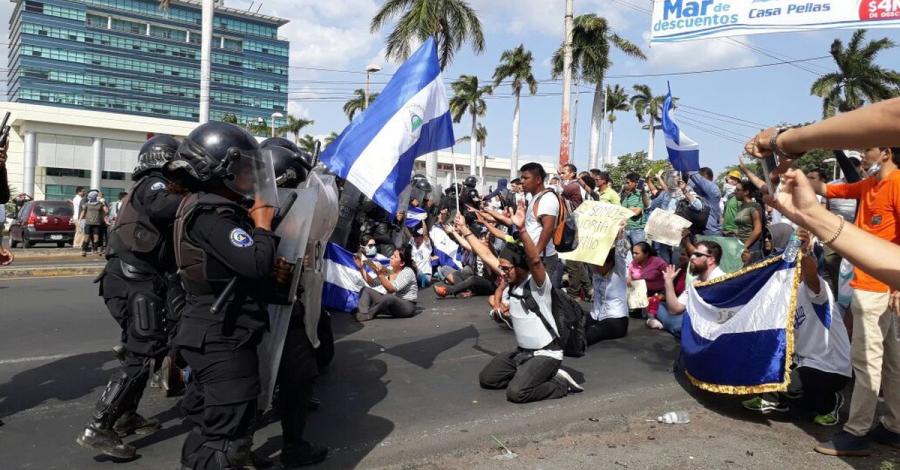 Peaceful protest during the Nicaraguan spring in 2018. Picture: ENFOQUE NOTICIAS

During a sunny Wednesday, on the 18th of April 2018, the consciousness of freedom in Nicaragua awakened, when students, feminist activists and retirees started to protest peacefully against the social security law reform. The amendment of the law attempted to deprive existing social benefits, such as free medicine for the elderly, and stagnate the level of pensions, as well as to increase the insurance payments for the working class. Suddenly, pro-government groups burst into the scene making insulting remarks towards protesters and beating some of them, mostly elderly and women. In the evening, most Nicaraguans and I watched the confrontation on TV with a sense of outrage.

We were tired of being afraid and angry about the crackdown of a peaceful protest. During that night, on the 18th of April 2018, many unauthorized demonstrations took place in the main cities and in about 50 small and medium-sized towns from Nicaragua’s Atlantic coast to the Pacific Coast and from Managua to the countryside. Thousands of people defied a heavy police presence to join some of the largest rallies against President Ortega in years. I was among the protesters, and I realized that despite political affiliation from the left or the right, we were just people expressing our anger and frustration toward a President, which for years, has managed through political pacts, and constitutional reforms to undermine democracy and human rights.

Since the early days of the Ortega regime in 2007, he engineered reforms to the legal framework of citizen and CSO participation and gained more power for himself. The regime enhanced the growth-oriented economic system favoring the private sector, not making them accountable for contributing, for example, to a wellbeing and climate-sustainable economy. In addition, the regime decided to consult the private sector on all socioeconomic policies. At the same time, while the government was forging a strong alliance with the private sector, CSO spaces were closed, undermining their influence. Nicaraguan CSO commitments on climate and human rights were identified as an obstacle for the regime’s ambitions.

This model worked for a while until the vast majority of the Nicaraguan people could not put up with the burdens caused by this unfair economic system. As a response, the regime intended to impose a tax reform that would increase the contribution of big companies to the social security system, breaking the earlier pact with the private sector. The 11-year alliance between the regime and the private sector broke down. The private sector joined the CSO sector and there were immense protests unlike anything seen in 30 years.

After massive demonstrations, the Ortega regime retreated, and started a dialogue with a sector of the civil society and the private sector. The social security reform was revoked. However, as the demonstrations and the counter action of the government had led to the death of over sixty people, the Nicaraguans continued to be angry and looking for justice. The regime feared they would lose the power and continued deadly police violence jointly with paramilitary actions against protesters. The dialogue fell apart.

In 2018, an Interdisciplinary Group of Independent Experts designated by Inter-American Commission on Human Rights (IACHR), concluded that there were, amidst the social protests that started on April 18, 2018, widespread, systematic attacks on civilians that—according to international law—amount to crimes against humanity committed by the state. According to statistics documented, as of June 19, 2018, the repressive actions of the State had resulted in at least 212 deaths, 1,337 injured and 507 persons deprived of their liberty[i].

As of today, the Ortega regime has enacted several laws that create the framework for a totalitarian state. The “law on cybercrimes” sets jail sentences for many online communications. The “foreign agents’ law” disqualiﬁes persons receiving funds from abroad from running for public ofﬁce. Another law prevents persons who call for sanctions on the regime from running in the election. By Constitutional reform undeﬁned “hate crimes” will be subject to a life sentence without parole. And the most recent legislation forces Nicaraguan banks to open accounts for persons and institutions sanctioned by the United States and other countries, thus encouraging money laundering and jeopardizing the Nicaraguan banking system.

The international community has now turned its attention to Nicaragua. However, before 2018 the international community never paid attention to the human rights deterioration in Nicaragua and the working environment of civil society. The economic growth numbers were more appealing. On the contrary, since 2018 the Nicaraguan economy has been declining. It seems that there is a correlation between the economic crisis and the worsening humanitarian situation in Nicaragua. On top of it all, Ortega has constantly accused civil society organizations of laundering money ”to develop destabilizing terrorist activities”. Therefore, just recently, 40 NGOs were shut down and 6 International NGOs were expelled from Nicaragua by the regime.

The deterioration of democratic institutions in Nicaragua shows the important role of CSO’s in the defense of human rights and sustainable development. The private sector and the political parties never shared the CSO’s commitments to democracy and sustainable development. Thus, Ortega’s regime cracked down on civil society to create a totalitarian state. The situation in Nicaragua taught us a lesson: The international community should take more responsibility in defending the CSO’s to achieve the Sustainable Development Goals (SDGs) by 2030. A stronger civil society in Nicaragua, effectively supported by the international community, could have prevented the crimes against humanity committed by the Ortega regime, just by playing their role in improving citizen education, development cooperation, strengthening grassroot organizations and advocacy work in favor of the SDGs. In our ever-changing world stronger CSO’s mean reliable achievement of SDGs.

José Valdivia has worked as KEPAs Policy Officer in Nicaragua as well as a consultant supporting sustainable economic policies and the enabling environment for civil society in the south. His policy work focuses on assessing economic policies and practices around sustainability as well as fairness, and transparency in the decision-making process engaging civil society.

The views expressed in this text are the writers own and do not necessarily reflect the views of Fingo.

[i] ”Gross Human Rights Violations in the Context of Social Protest in Nicaragua”, Inter-American Commission on Human Rights, 6/2018. http://www.oas.org/en/iachr/reports/pdfs/Nicaragua2018-en.pdf