Home » News » Agency and authentic inclusion of persons with disabilities must be strengthen in climate action, argues panellists at COP27 side-event 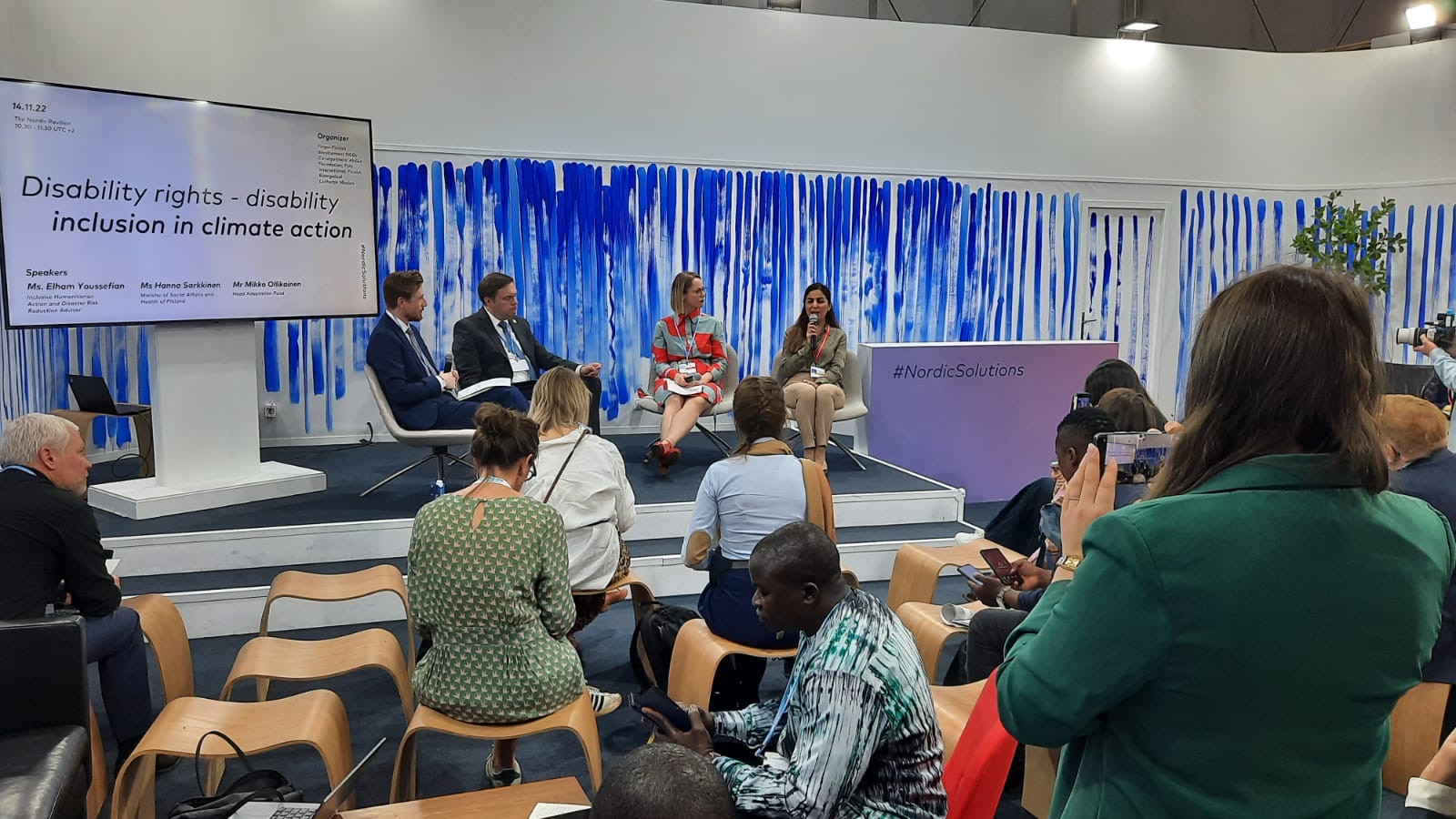 Fingo together with Abilis Foundation, Felm and Fida International organised a side event, Disability Inclusion in Climate Action, at the COP27 climate conference. The event, which was organised in the Nordic Pavilion, provided a platform for people outside of the venue to pose pre-recorded questions for the panellist present at the pavilion. The panel consisted of Mr Mikko Ollikainen, Head of the Adaptation Fund, Ms Elham Youssefian from the International Disability Alliance and H.E. Ms Hanna Sarkkinen, Minister of Social Affairs and Health of Finland. The event was moderated by Mr Jason Boberg, co-founder of SustainedAbility.

Persons with disabilities to the fore of climate action

In his opening remarks, UN Special Rapporteur on Disability Rights Gerard Quinn explained that his work aims to “shine a light on topics, events or phenomenon that have a dramatic impact on persons with disabilities and which might otherwise pass states by”.

Quinn emphasised that even though the UN Convention on the Rights of Persons with Disabilities gives key departure points for climate action, climate justice and climate adaptation, they cannot happen legitimately unless the authentic voice of persons with disabilities and their representative organisations are at the very fore.

“Persons with disabilities have been left out of similar major transitions in the past. If we have learned anything, it is that all voices count. If not, then the furthest left behind will have no chance this time around to catch up”, Quinn ended his speech.

The first question to the panellist was given by Beatrice Nafuna, Country Coordinator for the Abilis Foundation’s Uganda Country Office. Nafuna focused on disability inclusion in Uganda, where efforts have been made, but little has thus far been realised. Therefore, Nafuna posed the question: “What mechanisms could be used to increase participation of persons with disabilities, and improve disability inclusion in general, in climate action at the national level?”

Minister Sarkkinen noted, in response, that “it is very important to always have intersectional goggles on and to take into account disability, gender, social status, ethnicity and all the diversity of people”.

Echoing Quinn, Sarkkinen also emphasised the role of civil society and including persons with disabilities when formulating policies.

“It is important to have civil society organisations with persons with disabilities heard in national policy-making and to note that the choice between inclusive and non-inclusive methods in climate policy may be a matter of life and death.”

Capacity building and awareness-raising is needed

Thérèse Mabulay Kamalebo, the Coordinator of ASAM, argued that persons with disabilities should be consulted because they are also actors, not only beneficiaries or victims.

Elham Youssefian highlighted the importance of an intersectional approach and capacity building. By capacity building, she meant for example enhancing the knowledge and expertise of persons with disabilities and their organisations about climate change and UNFCCC’s processes as well as climate action organisations’ knowledge of the rights of persons with disabilities.

Another action Youssefian proposed is to establish a disability constituency. She also noted that implementing the UN disability inclusion strategy would remove a lot of barriers for persons with disabilities.

Disability inclusion should not be a mere tick box exercise

Niko Humalisto from the University of Eastern Finland turned the attention to the role of leadership. Humalisto asked the panellists how to make certain that inclusion does not become a mere tick-a-box exercise? And that disabled persons will not be mere beneficiaries, but that we will see projects that are planned, evaluated, and led by disabled persons themselves?

According to Ollikainen, persons with disabilities should not be seen only as vulnerable, but also as key actors in the decision-making of funding. “We need to put in place mechanisms and systems that ensure disabled persons are not forgotten by making explicit policies and strategies institutions”.

Moderator Jason Boberg ended the event on an optimistic note: “We have come a long way here, but there is still a long way to go but with collaboration we can get there very shortly.”